Once I decided to overhaul my eating habits, I needed someone to help me figure out what to cook. Enter the Food Yenta. The Food Yenta is a family friend that I've known pretty much my whole life. Thanks to facebook, we've been able to keep in touch even though we currently live in different states. A few months ago, I noticed that she was posting a lot of recipes on her page. Upon closer investigation, I discovered that she was writing a food blog about simplifying gourmet recipes and cooking with fresh ingredients. I was immediately hooked. At first, all I did was admire the mouth-watering pictures (she's a professional photographer, so they're gorgeous) and try to imagine how delicious the food was. Well, I can now say for certain that her food is awesome. And idiot-proof. Seriously, the recipes I've made so far are so much easier than they look that people don't believe me when I tell them. So as soon as you're done reading this, head on over to thefoodyenta.blogspot.com and try some of them yourself.
Below I'm going to tell you a little bit about how I adapted her recipes for myself, but feel free to change them to suit your taste too. I've included pictures and recipe links of what I've made since Saturday (when I started my food journey). If you have any questions about how anything was made, you can message the Food Yenta on her facebook page or at thefoodyenta@yahoo.com. I've been lobbing questions at her for four days now and she has been incredibly helpful and encouraging!
------------------
The first recipe I made was stuffed eggplant with coucous and fresh veggies. The original recipe called for zucchini, but the ones in the store were really small so I made the executive decision to switch vessels. One thing I like about the Food Yenta is that she encourages you to play with the recipes, so my friends and I decided to throw in most of the contents of my fridge (and then some more couscous to hold it all together). I've never really made couscous before, so I was surprised at how quick and easy it is. I used veggie stock for the base and it came out very flavorful. There was a lot of extra stuffing, so I baked it in a small casserole dish alongside the eggplant. One piece of advice - brush the eggplant with olive oil before cooking so that it roasts evenly. We had to go back later to add more olive oil and the end result was a bit oily because it's hard to be precise when your food is hot in the oven. 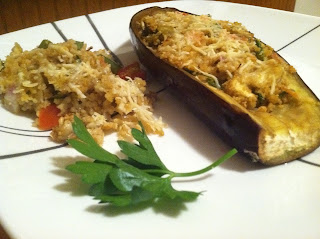 Here's the recipe: http://thefoodyenta.blogspot.com/2011/02/stuffed-zuccini.html#more
The second and third recipes I made were honey balsamic onions and green beans with cherry tomatoes. The onions are an ingredient in a tart I wanted to make, so I figured I'd make them early and use them twice. They are so sweet! I put them on top of steak, but I'm sure they'd taste good on almost anything. The green beans were fresh and crisp, but the tomatoes really stole the show. They were roasted, so they were sweet and juicy and bright. The recipe calls for brandy, but I used a dollop of honey in the veggie broth instead. You really can add anything; the fiance drizzled some balsamic and was really happy with the result. 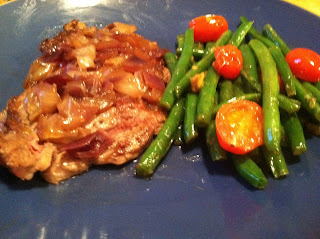 Here are the recipes: http://thefoodyenta.blogspot.com/2011/03/balsamic-honey-onions.html and http://thefoodyenta.blogspot.com/2011/03/brandied-string-beans-with-garlic-and.html
The latest recipe I adapted was a beet and goat cheese tart. Really, the picture was just too gorgeous not to. It has roasted beets (***NEW FOOD ALERT***) and fresh herbs and at least two kinds of cheese, so really, what's not to love? I'd never roasted beets before, but it was pretty easy. The beets were sweet, but not too sweet; I had an urge to put them in ice cream, but I don't know how that would turn out. (Maybe I'll try it and report back? Not sure yet...) I substituted gorgonzola because I'm not a big fan of goat cheese, but I think I used a little too much because the tart is pretty potent when it's warm. The fiance preferred it warm, but I like it chilled. It's up to you how you eat it. And when it comes to putting this together, you should let your nose be your guide. 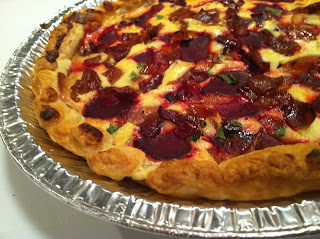 Here's the recipe: http://thefoodyenta.blogspot.com/2011/03/roasted-beet-and-goat-cheese-tart.html#more
That's it for now, but I'll let you know what other tasty creations I try from the Food Yenta. In the meantime, please post comments down below, I'd love to hear from you!
Posted by Danielle at 1:36 AM

Danielle
I have finally reached a point in my life that I never thought was possible: I am sick of take-out. I don’t want to eat in restaurants, I don’t want to order pizza, and I don’t want to pick up Chinese. I want to cook. I’m not an expert, and I don’t have all of the answers, so this blog will be about you as much as it is about me. Come, look around, give advice, get advice, and hopefully leave as excited about food as I am.